SUPPORT US
Home Jelena Jachim Jaćimović: The legacies of wars are still present in post-Yugoslav societies 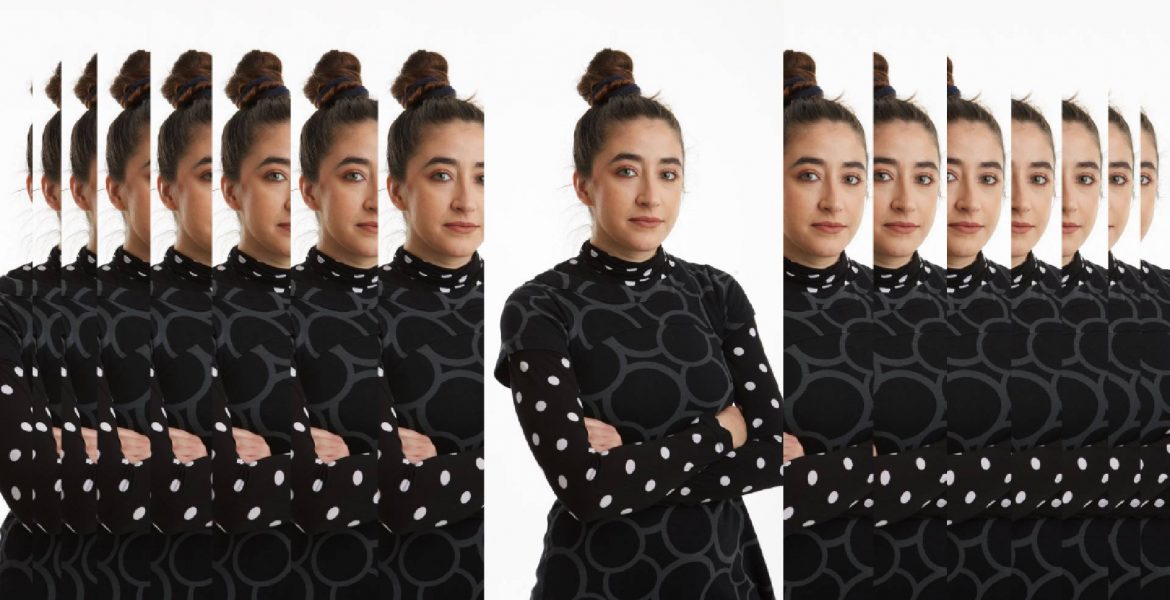 Jelena Jachim Jaćimović: The legacies of wars are still present in post-Yugoslav societies

Artist and activist Jelena Jaćimović showed her personal courage and responsibility on the International day against fascism and anti-Semitism, November 9th 2021, when she and her fellow citizen Aida Ćorović threw eggs at the convicted war criminal’s, Ratko Mladić’s mural, in central Belgrade. Although she then became popular among the wider public, she had previously been known for her exhibition „ArchiWar: Stories and Memories of the Srebrenica Genocide“. Jelena Jaćimović is an illustrator, a designer and activist. She completed her undergraduate and postgraduate studies at the Faculty of Applied Arts in Belgrade, the Department of Graphics and Book Design. She has been involved with the Betef Cenre, Women in Black, the Don’t let Belgrade D(r)own movement, The Streets for Cyclists organization, Contrast Publishing and the Liceulice street magazine. She is the recipient of the 2019 Befem Activist Design Award.

„The realization that someone’s life was cut short when being accustomed to death became normal, should make all of us feel sad and open for changes“, says Jelena Jaćimović who, in this interview she gave for our portal, also discussed topics which are her greatest inspiration; social immaturity and how irrelevant it is to create art in order to make money at the moment, when the world is falling apart. She also discussed about her faith in people and the lack thereof when it comes to institutions; about the Serbian state which, being as it now is, she does not need and the anti-Fascist approach as the common denominator of all our solutions.

You work with various media and organizations in Serbia. You have a solo exhibition. How does your artistic work vary in these three fields? Which one represents a greater challenge for your art? Where do you find inspiration?

I am presently only involved with Zoomer. It is a platform for young journalists and all those who wish to explore certain topics which are of their particular interest. I had a few solo exhibitions, one of which is on display at the Srebrenica Memorial Center. My artistic work is investigative, self-critical and educational. I always take the same approach. I cannot draw what I cannot understand. I therefore try to educate myself and to unify all the pieces of information in order to present them to the wider public. Responsibility is the greatest challenge but facing the topics I tackle is my greatest inspiration, as well as the desire that one day things will change for the better for all of us.

To what extent are young people interested in taking up conceptual or socially-engaged art?

I do not know. There are quite a few of us. It depends on what we mean by „young people“. In my view, they are waking up; we’re always waking up – regardless of how grown-up we are. However, we aren’t as mature as a society. That is the problem.

Has art been reduced to commercial success? If so, to what extent?

It certainly has. But on the other hand, it certainly hasn’t.  To each his own. To me, personally, what matters is that conceptual ideas surpass the aesthetics and that they do not only speak to a small group of privileged people. And because it’s so personal, I have no clue what other people think. The world is falling apart. I think it is therefore pointless to create art in order to make money. That would be my comment on it.

In a few words, what is it like to be a young artist in Serbia?

I am an applied artist and activist. It is kind of silly to say that I am an artist. I have no idea what I am. It may be easier to say that I am a young artist but I don’t feel that I belong to a particular community as such. It is repulsing to be a human being in a world where people hate each other on the mere presumption of being weaker or less worthy because they are different; in a society where it is a given that in order to prosper, one should trip up other people.  We are all in the same pot. Whoever and whatever we may be.

What is nowadays the greatest challenge for young artists and artists in general in a state that does not invest or barely invests in culture?

The state as it is, is of no use to me whatsoever. It has never been there for us – it can fuck off for all I care. We are used to it. And I am very loud now in criticizing it – why would I need its support when it doesn’t change? The society should change for the better – that is what matters to me. I believe in people, I don’t believe in institutions.

You have become known in the region thanks to your exhibition “ArchiWar: Stories and Memories from the Srebrenica Genocide”. You were inspired by the story of Amra Begić Fazlić, a woman who has survived the Srebrenica genocide and whose father and grandfather were killed. Could you describe the process of making the exhibition? What is it about?

This exhibition represents a way of resisting the dominant memory politics in Serbia based on nationalism and militarism that encompasses the denial of war crimes and genocide committed by Serb forces, glorification of sentenced war criminals and army, as well as the instrumentalization of Serb victims.

The legacies of the 1990s wars are still present in post-Yugoslav societies. In the early 2000s, the post-Yugoslav countries seemed to have at least formally committed to transitional justice. However, two decades after the end of the armed conflicts, the chances for transitional justice and reconciliations are even slimmer. Additionally, the dissolution of Yugoslavia involved fragmentation of its culture of remembrance along the ethnic lines and led to today’s deeply divided and incompatible memory cultures in the post-Yugoslav space. Politicians, media and public discourses across the region openly promote a revisionist and nationalist discourse that glorifies their own nation and criminalizes the others. The result of this tendency is a lack of awareness among society at large about the systematic human rights violations during the wars and about the manipulated and selective nature of the dominant narratives. The denial of the Srebrenica genocide in Serbia is the most prominent example of this revisionism.

As an artist, why was this story so important for you to tell?  What importance does it bear for us as a society?

I have already said this once – people don’t want to discuss unpleasant topics. It becomes evident when analyzing the nationalist and revisionist discourse in Serbia through the need to glorify its nation at any cost. Due to herd mentality and the fear of facing the crimes that were committed, we avoid talking about genocide as being someone’s guilt and hence that guilt falls upon the victims and the survivors. The result of this policy is also the wider population’s ignorance of the systemic breaches of human rights committed during the 1990s wars, as well as of the manipulated and selective nature of predominant narratives. In this context, we could also talk about the WWII – what has changed and how?  I would like to quote Amra Begić Fazlić, one of the Srebrenica Memorial team members whose story inspired me, “Srebrenica is my biggest loss.” There is nothing to add. The realization that someone’s life was cut short when being accustomed to death became normal, should make all of us feel sad and open for changes. People should not be beasts to each other, but people instead.

Are the wars resulting from the dissolution of former Yugoslavia a part of the cultural legacy of generations born during and after those wars?

Wars cannot be a part of cultural heritage. Those are different categories. The consequences of wars, just as their apparent causes, are in fact the flammable relations in the former Yugoslav societies. Cultural heritage should constantly be developing as an element of the struggle for a better society, but the current situation is such that there is also revisionism which is setting everything back. It’s simple – war is always bad, but there are many young people who cannot grasp it. They either never experienced it on their own skin or they think that there is a justifiable reason for violence. It’s a dehumanist legacy bequeathed to us by older generations.

For some „artists“ art is painting murals in honor of convicted war criminals, painting graffiti and symbols of hatred while the system protects them, sending a clear message of the society we live in. Is the guerilla-type of struggle adequate for artists, the academic community and citizens who want to be the voice of reason and put up resistance to fascism?

That is neither a mural nor street art. Street art is very often that which evolves in a guerilla fashion. The struggle for walls is outside the system. Murals require planning, permission and agreement with people who own the walls. Let’s first get this straight. Fascist graffiti are not street art, it is just a way to occupy walls and scare all those who see them. It is guerilla-warfare to destroy such works and what is most important, clean the walls and paint them over with anti-Fascist messages or some other artistic expressions. We are all part of the community and messages of hatred, just as all those evil men who did so much harm, cannot be a part of our public space. It is also fine if people do not want any writings or paintings on their house or building. That should be respected, too.

What are your views on socially-engaged art? Do you see it as a powerful tool and medium to highlight the important social issues and reach out to masses at a time when the media are predominantly controlled by the regime?

Well, I see it as a mere necessity. I really wished I lived in a country where there is no need for me to know its ministers, its president and where there were no wars and so there would be no need for me to be upset. Just as everyone else. People are being distracted. However, it’s no longer an issue that people fail to notice something. The pending issue is how to fight this relativisation and apathy? Fear and hatred lead to harmful compromises and potential risks for new conflicts and wars, and hence the struggle for peace is transposed to our personal, intercultural spaces. There are too many problems but an anti-Fascist approach is the common denominator of all the potential solutions. It seems to me that people have forgotten about this, so I try to remind them of it.

Milica Pralica is an activist, feminist and freelance journalist, born in Bosanska Dubica in 1991. She graduated communication science at the Faculty of Political Science in Banjaluka. Since 2012, she has been actively engaged in Association Oštra Nula, whose president she has been since 2017. She was a member of the first Organizing committee of BH Pride. Milica lives and works in Banjaluka.