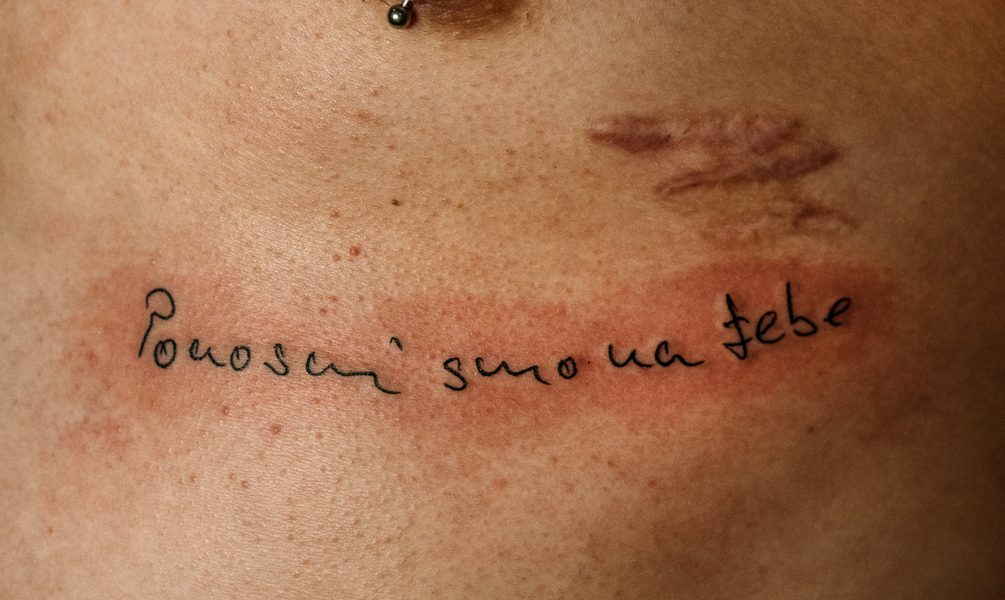 Denis Butorac  was born in 1992, Croatia. He obtained a master’s degree in Photography at the Academy of Dramatic Art. Apart from two Rector’s and Dean’s Awards, he also received the Marina Viculin Award, a monetary reward given as recognition to Croatian artists for their outstanding achievement in the field of photography. In September 2018 he presented his first solo exhibition Homesick, as part of the 10th edition of Organ Vida International Photography Festival. His photographs were exhibited in several solo and group exhibitions in Croatia and abroad.

In his artwork, photography is used as a medium for exploration of topics such as identity, family and tradition, thus building his own narrative series in which he combines documentary and conceptual. Lives and works in Zagreb, Croatia.

Derived from the Latin word epistol or epistula (message, letter), the word epistle is associated first and foremost with religious texts. However, its definition also encompasses a public, open letter addressed to one person. Besides as a medium of artistic expression, I have used photography to document performative processes with which I reconstruct lived experiences – while simultaneously creating new ones. I have used fragments from my past such as family archives, memories and situations that have significantly influenced the formation of my identity, and which would often leave me feeling like a stranger. With these, I have built a visual narrative addressed to my father, like a letter never written.

Growing up in a conservative environment is the kind of burden that every individual existing outside the boundaries of socially acceptable conventions must learn to carry through life. Carrying the burden of his otherness, Denis Butorac, in his exhibition Poslanica (Eng. Epistle), showcases, through the medium of photography and ready-mades, his confrontation with his family’s tradition and his departure from the gender role he was assigned to.

Butorac’s graduation exhibition is a documentation and reconstruction of his life. Each exhibited photograph or object from his childhood represents a fragment of his memories. Growing up in a predominantly male family which still keeps war relics from the 1990s, Butorac takes from his family archives the war motives that accompanied him as he grew up and places them in the context of his personal development as an independent person who can no longer relate to that part of his family’s history. In choosing to present warlike features such as a series of well-preserved bullet casings as his photographic motives, he confronts us with the question of whether they represent a connection to the machismo that he faces and tries to cope with. Thematizing the deviation from social expectations, the author, through photographs and exhibited objects, deals with himself not being a part of the traditional entrenched image of a man. This is achieved through juxtaposing personal, feminine elements with extremely warlike, masculine elements. The expectations of his family are also reflected in the open page of the coloring book which shows the role that Butorac, as the eldest of his brothers, is destined to take on – it is up to him to assume the patriarchal role of the breadwinner, i.e. the standard role of his assigned gender within family life.

Through photography, Butorac captures not only the memory of society and family, but also his independence from the established social rules. The photographs show a series of performative moments by which the artist talks about his family and their desires for his transformation into a more socially accepted image of a man. From the photographs of the attached diary pages, which serve as some sort of historical proof which Butorac refers to, the author’s desire to break that chain of masculinity perpetuated through generations is recognized. The artist portrays himself with an earring, a mohawk and piercings which he did not wear for fear of failing to meet his family’s expectations. He further photographs himself in an intimate moment of crying, a moment that he had to hide in childhood, which marks an important point in his life because he no longer accepts the rules of toxic masculinity. In the photographs where the artist documents the performance processes, religious motifs are recognizable. Butorac’s Marian, wretched tears, the cross as a symbol of the burden of the crucifix, and the martyrdom of the artist’s self-portraiture resembling Andrea Mantegna’s painting St. Sebastian are iconographically interpreted as the artist’s portrayal of himself as a martyr who dispenses with the rigidity of familial and social conventions of gender. Assuming the pose of wounded Saint Sebastian plays an important role in the author’s oeuvre, as it symbolizes the triumph over injustice and suffering that followed him throughout his life.

It is, therefore, not surprising that the author has chosen the name Poslanica (Eng. Epistle) as the name of his graduation exhibition. The word, besides having religious connotations, signifies a public letter in which the author personally addresses someone. Butorac’s exhibition thus takes the form of a personal letter in which the artist shapes his emancipation from family expectations through the visual language of his photographs and exhibited objects.