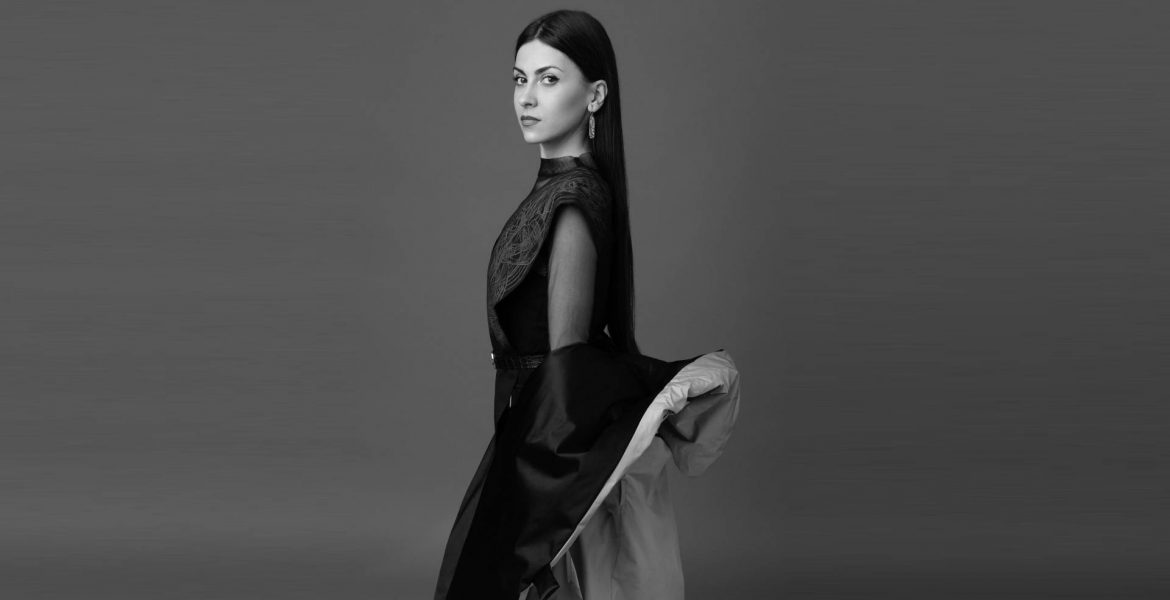 Hanna Dujmović was born in Sarajevo, Bosnia and Herzegovina on 16th June 1994. In 2017 she took part in a sculpture colony held in Cazin at the Ostrožac Castle. The aim of the colony was to preserve the cultural heritage, enrich the public space within the walls of the Ostrožac Castle with sculptures made of bihacit, the authentic Krajina limestone.  Her sculpture “Snail” is exhibited in this open-air art gallery. That same year she was nominated for the Alija Kučukalić Award as the best student in her class with her piece titled “Mother Nature” – a nude female figure in semi-recumbent position painted with pellet. Following the nomination, she had her first solo exhibition at the Raiffeisen Bank Gallery in Sarajevo and participated in a group exhibition held at the Academy of Fine Arts in Sarajevo. In June 2017, she successfully graduated from the Academy of Fine Arts in Sarajevo, receiving the University of Sarajevo Silver Badge. She has so far exhibited her works in a number of significant international and domestic exhibitions, most notably: Sheroes in Quarantine, London, UK (2020), Calling across the Distance, San Francisco, CA, USA (2020), Limitless art, Naples, Italy (2020), Look into unexpected, Belgrade, Serbia, Pavillion Cvjeta Zuzorić (2021), WAS IST WALTER, Historijski muzej BiH, Sarajevo (2020).

In September 2021, she had her first solo exhibition at the Atrium Gallery in Belgrade (the Belgrade City Library). The same exhibition was then taken to Dorćol in Belgrade.  This November, together with her colleagues Marko Frančešević and Samir Sućeska, she has been working on a sculpture commissioned by the global UNDP project “Let Extinction not be Your Choice”. She is one of our rare sculptors whose works strive to shed light on heated topics such as climate change and environmental awareness. At present, Hanna’s paintings are available from world’s greatest platforms promoting and selling art works (ArtFinder, Singulart). Her paintings are part of more than 250 private art collections across the world.  Hanna resides and works in Sarajevo.

HANNA’S ART AS DESCRIBED IN HER OWN WORDS

I define my paintings as individual and unique windows of opportunity through which we are able to escape reality and travel to a completely different moment, to a world where everything is calm and relaxing like a summer breeze providing soothing refreshment and putting a smile on our faces.

My imagination is an inexhaustible source of ideas and I do my best to transfer those ideas onto a canvass and attract as many admirers of this art form as possible.

I am at liberty to say that my works are a combination of naïve and neoimpressionist art which is so much different from the abstraction and minimalism so popular in contemporary art. I believe that the roots of the art of painting originate from the attempt to tell stories from a given time through pictures, as the case was until the emergence of photography. Now that we have photography, it is interesting to explore one’s own imagination and find a way into a new world known only to the artist, i.e. me and to present it. That is precisely what makes these works of art authentic and outstanding, for none of you are me just as I am not you. My world of imagination is one of a kind and knowing how to present it in a creative way is an immense pleasure.

Abstraction can be interpreted in a number of ways, but such interpretations are short-lived as people fail to see in them anything that they could relate to. It’s most uncommon. With narrative paintings, people see the composition with which they can relate and interpret it in a number of ways and in order to do so, a person will focus on the painting long enough to start liking it.

In fact, the most interesting part of the creative process for me is the observer’s interpretation of a work of art. I take great interest in their reactions, emotions and looks. You simply cannot but take pleasure in the fact that you have just triggered an emotion in someone. The paintings I create emit a positive energy so badly needed in these difficult times.

Being an artist in Bosnia and Herzegovina is a very challenging task. It is a profession that half of our population sees as a hobby of which one cannot make a living. That is not far from the truth, but being an artist from Bosnia and Herzegovina who puts her works out on the world market is marvelous! Doing what I love most, enjoying it and making a living of it is a winning combination. I sometimes think it is all a dream that will eventually come to an end, but as long as it lasts, I intend to seize every opportunity thrown in my way. For, once we have left this world, all that remains behind is how we treated other people and what we did during our stay here. I want to prove to myself that I can make it one step at a time and I want my works of art to be my legacy for future generations as there were very few women artists in our country. I aspire to achieve equality and entice new generations of women and girls to persist in whatever they love doing.

PAINTING OF OPTIMISM AND SYNERGY OF SENSES

‘’Hanna Dujmovic’s coloristic figurative painting is like ‘’a comfortable armchair’’ as Henri Matisse used to say. The young artist has built a distinctive artistic expression thanks to her intimate nature and desire for simple and pleasant communication in a time when we are increasingly moving away from each other, and even from ourselves. Visually appealing paintings were created on the postulates of Fauvism and naïve, narrative art with accentuated drawing elements. Thematically, the author most often depicts genres – female figures in interiors with a multitude of details in a coloristic perspective, where spatial plans intertwined in playful ornamental surfaces are separated by black contours. Hanna Dujmovic shows her “painting homeland” in which she awakens good old customs such as the ritual of drinking coffee, a meditative rest in the colorful intimate space of the home, evokes the spirit of the tradition of a benevolent Bosnian mentality. It shows us comfort, love of life, love of beauty and details. In such idyllic spaces there is always a WOMAN present, SHE who knows how to make comfort, SHE who makes the home happy, mother, protector, friend.

The author’s romantic spirit, searching for the lost harmony of the world, opens its windows to enter its magic, calmly, with a smile.

In her distinctive and thoughtful mimetic approach, the painter persistently searches for the spaces she dreams of, in order to feel and convey moments of happiness and optimism in the sumptuous interior scenes. Optimism awakened by colors, scents of exotic drinks, mint and cinnamon, flowers in vases, the chirping of birds, the sounds of silence and picturesque dreams.

Hanna Dujmovic’s painting certainly deserves attention, because she is faithful to traditional painting, faithful to her homeland, which she transforms through her distinctive imagination, and precisely because of the effective influence of her imagination, she did not follow ubiquitous non-figurative expressions and painting trends. She is a narrator and her lavishly colored stories evoke a synergy of senses.’’