SUPPORT US
Home “Chekhov’s First Play”, eternal search for the meaning and theatre as an experience 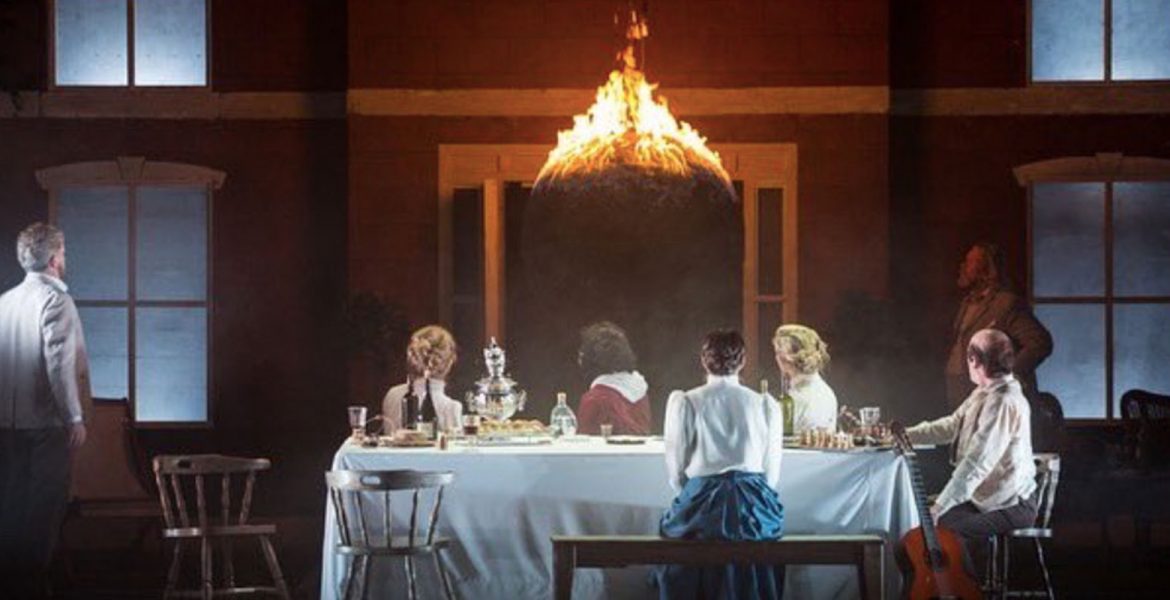 “Chekhov’s First Play”, eternal search for the meaning and theatre as an experience

“Chekhov’s First Play” performed by Dead Center opened the 61. edition of the theatre festival MESS. The peculiarity of this performance has many elements, one of which is that it was directed by two people, Ben Kidd and Bush Moukarzel.

Chekhov’s first play is based on Chekhov’s text, ‘Platonov’, which the directors and Chekhov himself have deemed to unfortunately be quite . ‘Platonov’ is a work that has a long-standing reputation of being unstagable. It was written when Chekhov was 18, and he hid it all his life, ashamed. The play begins with director Bush Moukarzel taking the stage and addressing the audience directly. He explains that he will be running audio commentary during the play, explaining what might otherwise be unclear to the audience; from subtext to context. The curtain opens and the audience is greeted by an extremely realistically constructed set that evokes the scene of a Russian villa. There a group of upper class Russians gather at a dinner party. Platonov is constantly mentioned. He is a character who does not appear for a long time, but his arrival is eagerly awaited. All the other characters talk passionately about him, he is the only thing they are still missing. The spotlight illuminates a selected member of the audience who will play Platonov (Abbas Hamzi). With his arrival, Platonovo initiates a change in everyone else. But he himself never speaks or acts. Each character pulls him to his side, asking him to be what they need; from love to a way out, courage, meaning. Very quickly it becomes clear to the viewer that this is no ordinary play.

For the most part, Chekhov’s First Play deals with meaninglessness. The characters are constantly looking for the meaning of their lives and waiting for a justification from Platonov. His silence allows them to project their own meanings onto him. Platonov has no traits, and thus he is free to become whatever they need. Symbolically, this is underlined by the fact that Platonov is played by  a select member of the audience, a man from the masses who has nothing to do with the world on stage. Through the characters we see an extremely human tendency to constantly search for meaning in everything; in Platonov, in our own existence, in theater and plays such as this one, even though a meaning is not always there. Neither theater has all the answers nor does it create absolute truths. We are all, like the characters on stage (even Chekhov himself) sometimes lost, as we are all constantly looking for something. In life and art, despite our tendency to believe otherwise; sometimes things don’t happen for a reason.

The thesis that there are no absolute truths is highlighted with the way in which Chekhov’s First Play toys with the idea of ​​Chekhov’s gun. Already in the first minutes of the play, director Bush Mourkarzel mentions this concept, although it is only later explained. Chekhov’s gun, one of the most famous “rules” of theater, says that if a gun appears somewhere on stage in the first act, it must fire by the end of the last act. Moukarzel and Kidd play with that rule, and have the gun fire in the very first act, signaling the director’s suicide. Just as during the play the scene collapses and the original idyllic image disappears, but ends with Plato’s “hello”, so human lives (as well as art history) are made up of ends and beginnings, construction and collapse, new forms as an act of violence against old.

In the first half of the play,  the director is commenting on his choices. Due to his intrusions, we often do not hear the actors, their lines are interrupted and drowned out by the director’s explanations. In an attempt to clarify meaning, meaning is lost. Chekhov’s first play shows us that theater is just one form of the human search for answers. This is true for theater creators and spectators alike. Chekhov’s first play does not provide answers, but together with the audience seeks the right questions to ask. Chekhov’s First Play is ,above all else, an experience.

Zoe Ibrahimović (2000) is a Dramaturgy student at the Academy of Performing Arts. She finished high school in Berlin and Mostar. In her spare time, she runs her own blog, Hedonixsm, dedicated to film and book reviews.